In my first blog in the series on drawing autonomy in Australian defence documents I focused on the themes and frequency differences between the services when it came to their use of the word autonomous in key planning documents.

This time, I’ve taken a broader sweep of documents with an aim of focusing on theme and frequency in general, rather than a service-based comparison. This enables broader insights into the place of RAS in defence thinking – as we can also see the emphasis placed on RAS in broader planning documents, and the presence or absence of the themes identified in the previous blog.

This time, the documents used include:

2018, ADF, ADF Concept for Command and Control of the Future Force

2019, RAAF, At the Edge: Exploring and Exploiting our Fifth Generation Edges

A quick final note on process before I leave you to explore the data viz – each document was searched for the word autonomous, with exclusions being made for being in the name of research centres, for being in the reference list, and for being in appendices. I did put some thought into the symbols being thematic – the money sign and tick are obvious, but the circle for broad defence planning is inspired by the OODA loop, and the square for RAS defence planning is a very simplified classic robot head.

Rather than say any more about what this process revealed to me, I’d rather leave you to explore the data yourself – in the spirit of Lupi and Posavec’s approach to data humanism. Please do let me know if you have any thoughts on the choices of themes and documents, or if there’s any other angle you would like to see explored in future blogs. 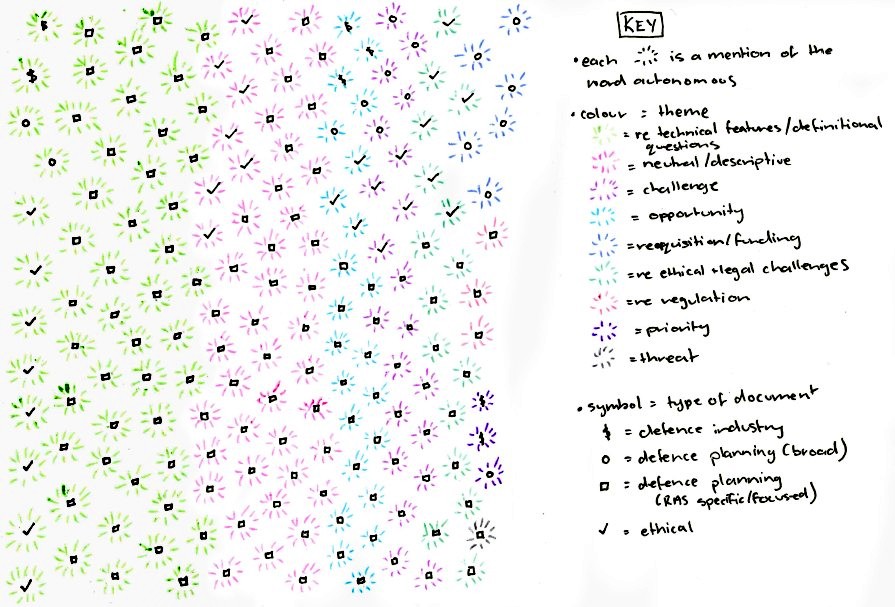